FILM REVIEW: THE PERKS OF BEING A WALLFLOWER 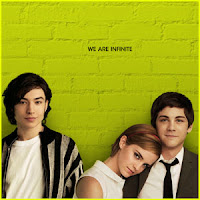 
A wallflower, by definition, is someone who watches life from the sidelines. And I guess you could have called me a wallflower when I was in high school but I'll also maintain that I was one by choice.

I went to school, I went home. I had friends but for whatever reason, I didn't hangout with them after school or on weekends (somewhat more surprising given I lived in a country town, and those who lived within the "city" limits were no more than a maximum 15 minute walk away). I think I would have went to less than five school dances in my entire high school life and I didn't date anyone. Ever. And the only grief I ever gave my single parent mother was by being a fussy eater.

Of course this biographical detail would not make for a Hollywood high school film where angst, romance, and revolt are the compulsory touchstones and plot points. The Perks Of Being A Wallflower does indeed subscribe to these tropes, but it does so nimbly and freshly. And while the events of the film may take place in the early 1990s, apart from a noticeable lack of technology (no email, social media, smart phones or even - gasp - mobile phones of any description), the film is both timeless and relevant: we've all been teenagers at some point (however much of a wallflower we may have been).

Charlie (Logan Lerman) is very much a wallflower; various events and circumstances in the life of the first year high schooler having lead him to be a quiet observer, existing on the fringe of the student body. And while Charlie's observational nature may serve him well should he indeed become the writer he thinks he would like to be, like Garth Brooks sang in the early '90s (though not on the soundtrack of this film), life is not tried it is merely survived if you're standing outside the fire.

And Charlie's baptism of fire (if you will) comes not too long into his first year of high school when he falls in with Patrick (Ezra Miller), a fellow Wood Shop student who seems to be there solely to test the resilience of his teacher, and Patrick's stepsister, Sam (Emma Watson), with whom Charlie is instantly smitten. Despite being seniors, they welcome Charlie into their posse of artsy outsiders, including punk girl, Mary Elizabeth (Mae Whitman), kleptomaniac rich girl, Alice (Erin Wilhelmi), and closeted footballer, Brad (Johnny Simmons).

They also introduce the introvert to sex, drugs and rock 'n' roll, and The Rocky Horror Picture Show. But Patrick and Sam aren't so much a corrupting influence as they are a comforting one. For Charlie is still mourning the loss of his best friend a year earlier, who took his own life with a gun, whilst also being haunted by visions of his Aunt Helen (Melanie Lynskey), his one-time favourite person in the world, and whose death when he was just 4 or 5 years old he feels somehow responsible for.

It helps and encourages Charlie that Patrick -- unapologetically gay in a time and place where that's not cool, and in love with someone (Brad) who refuses to be as open about his sexuality as Patrick is -- and Sam -- an object of men's affections from a very young age, who may have done some unfortunate things as result, and is now trying hard to make something of herself, to be taken seriously -- are equally as wounded. But Perks is by no means a downer.

Stephen Chbosky does a fine job of not only adapting his novel for the screen but in directing his first feature film. I've not read the novel which, since being published in 1999, has become a Young Adult favourite and even added to 'required reading' lists in high schools, so I can't say if Chbosky's too close relationship to the material has hampered his efforts. But for me, everything in The Perks of Being A Wallflower seems just about right if not entirely perfect.

That goes for the performances, particularly of the three leads. Ezra Miller does a compete 180 from last year's turn as the titular psychopath in We Need To Talk About Kevin, making Patrick flamboyant yet embraceable company; comfortable in his skin even if his fellow students and teachers aren't.

And Emma Watson, free of her Hermione Granger persona and locks (sporting a pixie cut-of-sorts here), makes a more than valiant stab at both her American accent and the role of a girl on the cusp of womanhood.

But it's Logan Lerman who impresses most. Best known to a younger demographic as the heroic lead in Percy Jackson and the Lightning Thief (2010), he first came to my attention opposite Renee Zelwegger in another coming of age film, My One And Only (2009).

Lerman makes Charlie unassuming to the point of innocent, yet his awakening (if you like) is both amusing and touching without ever being played for effect. It's not the type of performance that sets awards bodies abuzz but Lerman's is easily one of the best of the year.

The same could be said of the film. In its depiction of a recognisable universe of feeling, The Perks of Being A Wallflower should resonate with audiences on some level no matter your age or experiences. Sadly, the film is only receiving a limited release here in Australia, so I'd recommend you follow Charlie's lead (and Garth Brooks' advice) and get amongst it.
Posted by D.R. at 10:26

D.R.
I have been writing film reviews professionally (i.e. occasionally paid for it) since early 2004, and while I wouldn't call myself a critic, I know what I like and, especially, what I don't. And, yes, I have my peeves: sequels, prequels and franchises smack of commercialism over art; films that run over 2 hours better have a good reason; talkers, loud eaters, and phone checkers in public cinemas, grrrr! But there are things I like and even love: Kate Winslet, that film that comes from nowhere and blows you away (see Once), a Hollywood film that dares to be intelligent and original. And Kate Winslet. But I'm open to all films, from everywhere, and am happy to share my thoughts on them here with you.

This list will be updated every time I see a film in a cinema in 2019.
Eighth Grade
Vice
Green Book
Bohemian Rhapsody
Spider-Man: Into the Spider-Verse
On the Basis of Sex
If Beale St Could Talk
Captain Marvel
Us
Avengers: Endgame
1985
Top End Wedding
Toy Story 4
Booksmart
Parasite
Yesterday
Apollo 11
Midsommar
The Australian Dream
Once Upon a Time. . . in Hollywood
The Nightingale
The Farewell
Amazing Grace
Ad Astra
Hustlers
The Irishman
Charlie's Angels
Judy
Marriage Story
Pain and Glory
Joker
The Two Popes
Little Women
Knives Out
Portrait of a Lady on Fire
Star Wars: Rise of the Skywalker
Jojo Rabbit